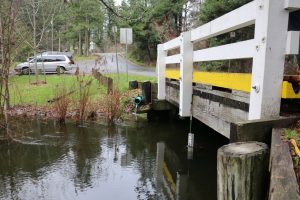 Water gauge on the right, looking south toward Prospect Lake from under the Goward Road bridge. Oct 22/ 2018

The staff gauge is read like a vertical measuring tape using the metric system. The gauge is set at the creek bottom so measurements show depth to the bottom of the creek (ie: creek water depth). The top of the black lines are even numbers.

Sept 7th, 2018: This photo shows all the flow in Tod Creek channeled through the piece o plastic pvc pipe we brought along. To stop most of the leakage around the pipe we squeezed in bits of moss around the pipe. That way the flow can be measured quite accurately by timing how long it takes to fill a small container. In the photo Gwen is holding a watch in her other hand, for timing. To get a flow measurement she would count down “3,2,1, now” and at “now” I would catch the flow in the 500 mL bottle shown in the photo and call out “stop” when it is nearly full. As it turned out, the flow was stronger than I had previously estimated and it took only 4 seconds to fill the container. We should have brought a larger bottle, such as the 1L milk bottle that Bernie brought along later to do measurements of flow in Meadowbrook Creek.

This measurement of 8L/minute was taken in Tod Creek about 100 m upstream from the creek mouth in Tod Inlet. The small pools right where we did the measurement had several small fish, likely coho fry. Where the creek flows between boulders in its rocky bed the flow seemed like hardly even a trickle. So a flow equivalent to what a lawn sprinkler uses is enough to keep the little salmon alive in a creek.

It is important to note that the measurement was taken on the morning of Sept 7 [2018] just before that first showers started in the afternoon. The last significant rain occurred on June 30 [2018], so this was the flow in Tod Creek after more than 2 months of drought. I’m not sure how extreme this summer’s drought was compared to other years, but judging by the distressed state of trees on the dry uplands at Gore Park, this drought was especially severe.

Someone responded that looking at the above photo it seems like an awfully small flow for a “creek”. But maybe that is just the point: that a flow of just a few L/min can be sufficient to maintain the pool/stream habitat for salmon fry during severe droughts. And so maybe the concerned residents around Prospect Lake need not be quite so worried that the lake would be drained just to keep a few fish alive in Tod creek. Based on a lake area of 74 hectares and a lake evaporation loss of 5mm/day (for a typical summer day) the lake loses about 2500 L/minute, averaged over 24 hours, by evaporation, so releasing say 10L/min to maintain flow in Tod Creek would not even be noticeable. Even over a whole summer (100 days) such a release, amounting to 1 acre-foot, would only lower the water level of the lake by 2 mm.

Even a release of 100L/min would only lower the lake level by only 2 cm over a summer. Such a release would likely suffice to offset water losses from the creek to riparian vegetation, and maintain flow and aerated pools in Tod Creek all the way past Tod Flats and to the fishway.